Buddhism in a nutshell – The Zen Universe 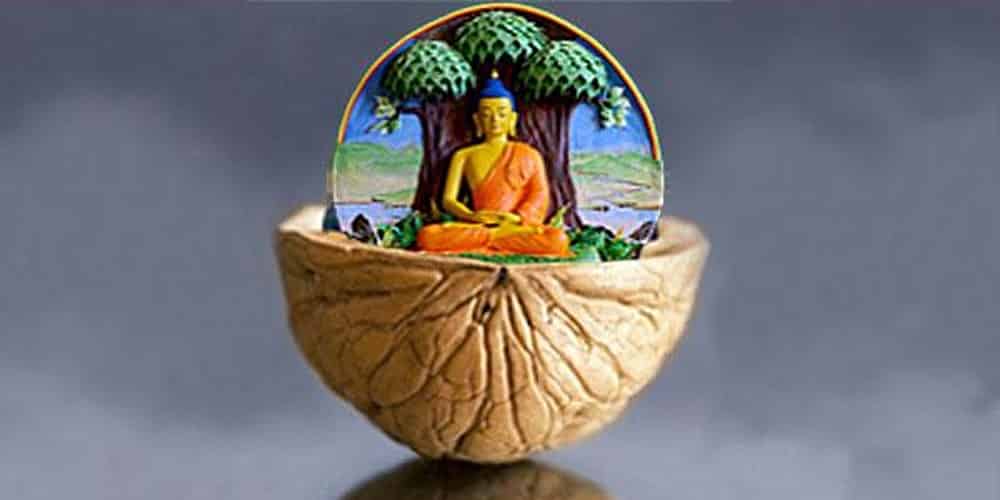 Buddhism began in India 2.500 years ago and remains the dominant world religion in the East. There are around 500 million followers of Buddhism worldwide, representing 7% to 8% of the world’s total population.

Buddhism is based on the teachings of an Indian prince named Siddharta Gautama who lived around 500 BCE. According to Buddhist tradition, the young prince left his life of luxury to seek answers for his questions about life and suffering. Eventually he succeeded, becoming the Buddha – the “Enlightened One” at 29. He spent the rest of his life teaching the dharma (the path to liberation from suffering) and establishing the sangha (a community of monks).

Gautama’s teachings differed from the Hindu faith prevalent in India at the time. Gautama’s beliefs were more egalitarian, accessible to all who wished to be enlightened. The basic doctrines of all Buddhism include the “four noble truths”: existence is suffering (dukhka); suffering has a cause, namely craving and attachment (trishna); there is a cessation of suffering, which is nirvana; and there is a path to the cessation of suffering, the “eightfold path” of: right views, right intention, right speech, right action, right livelihood, right effort, right mindfulness, and right concentration.

Buddhism characteristically describes reality in terms of process and relation rather than entity or substance. Experience is analyzed into five aggregates (skandhas). The first, form (rupa), refers to material existence; the following four, sensations (vedana), perceptions (samjna), psychic constructs (samskara), and consciousness (vijnana), refer to psychological processes. The central Buddhist teaching of non-self (anatman) asserts that in the five aggregates no independently existent, immutable self, or soul, can be found. All phenomena arise in interrelation and in dependence on causes and conditions, and thus are subject to inevitable decay and cessation. The casual conditions are defined in a 12-membered chain called dependent origination (pratityasamutpada) whose links are: ignorance, predisposition, consciousness, name-form, the senses, contact, craving, grasping, becoming, birth, old age, and death.

From the beginning, meditation and observance of moral precepts were the foundation of Buddhist practice. The five basic moral precepts, undertaken by members of monastic orders and the laity, are to refrain from taking life, stealing, acting unchastely, speaking falsely, and drinking intoxicants. Members of monastic orders also take five additional precepts: to refrain from eating at improper times, from secular entertainments, from using bodily adornments, from sleeping in high and wide beds, and from receiving money. Their lives are further regulated by a large number of rules known as the Pratimoksa.

The monastic order (sangha) is venerated as one of the “three jewels,” along with the dharma, or religious teaching, and the Buddha.

Buddhism has spread over many countries, split into numerous sects, and adopted a wide variety of beliefs, practices and customs. Some emphasize rituals and the worship of deities, while others completely reject rituals and gods in favor of pure meditation. However, an essential unity underlies these differences. All forms of Buddhism share the same respect for the teachings of the Buddha, and have the same goal – the ending of suffering and of the cycle of rebirth.

There are many subdivisions within Buddhism, but most can be classified into three major branches: Theravada (“Way of the Elders”), Mahayana (“Greater Vehicle”) and Vajrayana (“Diamond Vehicle”). Theravada and Mahayana Buddhism went their separate ways in the first century AD. Mahayana then subdivided into several diverse schools, such as Zen, Pure Land and Nichiren, many of which flourish today in East Asia. The Vajrayana Buddhist tradition is an esoteric sect that is predominant in Tibet and Nepal. Theravada Buddhism, prominent in Southeast Asia, is atheistic and philosophical in nature and focuses on the monastic life and meditation as means to liberation.

The practice of meditation is central to nearly all forms of Buddhism, and it derives directly from the Buddha’s experiences and teachings. Meditation is the central focus of Zen Buddhism and the only way to liberation in Theravada Buddhism. In addition to meditation, the Mahayana schools of Buddhism have developed a variety of other ritual and devotional practices, many of which were inspired or influenced by the existing religious cultures of India, China, Japan, Southeast Asia, and Tibet.

In Buddhism, there are a vast number of Buddhist scriptures and religious texts, which are commonly divided into the categories of canonical and non-canonical. The former, also called the Sutras (Sanskrit) or Suttas (Pali) are believed to be, either literally or metaphorically, the actual words of the Buddha. The latter are commentaries on canonical texts, other treatises on the Dharma, and collections of quotes, histories, etc. The Buddha’s teachings were collected into the Tripitaka or “three baskets.”

Buddhism is a complex subject, a philosophy that has evolved in many different ways and various regions of Asia, and is still a living faith today, all over the world.