Home
Resources
Wabi-Sabi – The Art Of Imperfection – The Zen Universe

Wabi-Sabi’s roots lie in Zen Buddhism, which was brought from China to Japan by Eisai, a twelfth-century monk. Zen stresses austerity, communion with nature, and above all, reverence for everyday life as the real path to enlightenment. To reach enlightenment, Zen monks lived ascetic, often isolated lives, and sat for long periods of concentrated meditation.

Until the fourteenth century, when Japanese society came to admire monks and hermits for their spiritual asceticism, wabi was a pejorative term used to describe cheerless, miserable outcasts, desolation and abandonment.

Starting with the 15th century

Starting with the 15th century, as a reaction to the prevailing aesthetic of lavishness, ornamentation, and rich materials, wabi-sabi became the art of finding beauty in imperfection and profundity in earthiness, of revering authenticity above all.

Wabi-Sabi’s origins are also linked to 16th century tea ceremony, where one of its defining principles developed;  “By learning to serve so well that you no longer need to think about what you are doing, you are free to focus on your guests.”

Wabi and sabi are two of the key Japanese aesthetic concepts. Over time, the two have been combined to form a new word, wabi-sabi, meaning an aesthetic sensibility which includes these two related ideas. Originally, the Japanese words wabi and sabi had quite different meanings. Sabi originally meant ‘chill’, ‘lean’ or ‘withered’. Wabi originally meant the misery of living alone in nature, away from society… Around the 14th century, the meanings of both words began to evolve in the direction of more positive aesthetic values. … Over the centuries, the meanings of wabi and sabi have crossed over so much that today the line separating them is very thin.

Wabi stems from the root wa, which refers to harmony, peace, tranquility, and balance. Generally speaking, wabi had the original meaning of sad, desolate, and lonely, but poetically it has come to mean simple, unmaterialistic, humble by choice, and in tune with nature. Someone who is perfectly him/herself and never craves to be anything else would be described as wabi, which is to say, he or she is content with very little; is free from greed, indolence, and anger; and understands the wisdom of all the living nature.

Wabi means things that are fresh and simple. It denotes simplicity and quietude and also incorporates rustic beauty. It includes both that which is made by nature, and that which is made by man. It also can mean an accidental or happenstance element (or perhaps even a small flaw) which gives elegance and uniqueness to the whole, such as the pattern made by a flowing glaze on a ceramic object.

Sabi by itself means “the bloom of time.” It connotes natural progression – tarnish, hoariness, rust – the extinguished gloss of that which once sparkled. It’s the understanding that beauty is fleeting. The word’s meaning has changed over time, from its ancient definition, “to be desolate,” to the more neutral “to grow old.” By the thirteenth century, sabi’s meaning had evolved into taking pleasure in things that were old and faded. Sabi things carry the burden of their years with dignity and grace: the chilly mottled surface of an oxidized silver bowl, the yielding gray of weathered wood, the elegant withering of a tree in Autumn.

Sabi means things whose beauty stems from age. It refers to the patina of age, and the concept that changes due to use may make an object more beautiful and valuable. This also incorporates an appreciation of the cycles of life, as well as careful, artful mending of damage.

Wabi-Sabi is the kind of perfect beauty that is seemingly-paradoxically caused by just the right kind of imperfection, such as an asymmetry in a ceramic bowl which reflects the handmade craftsmanship, as opposed to another bowl which is perfect, but soul-less and machine-made.

Wabi and Sabi are independent word stems in normal speech. They are brought together only to make a point about aesthetics. Sabi is most often applied to physical artistic objects, not writing. A related term in literature and the arts is “clinamen”, the act of deliberately breaking a stylistic rule to enhance the beauty of an otherwise perfect whole.

Wabi-Sabi is a Japanese concept

Wabi-Sabi is a Japanese concept with various interpretations, but those that resonate deeply are rustic elegance, quiet taste, refined beauty, and the belief that objects gain value through use and age. Wabi-Sabi is authentic, unpretentious and connected to nature.

Nowadays, we tend to associate wabi-sabi with physical characteristics – imperfection, crudeness, an aged and weathered look, etc. Although wabi-sabi may encompass these qualities, these characteristics are neither sufficient nor adequate to convey the essence of the concept.

Wabi-Sabi is not rigidly attached to a list of physical traits. Rather, it is a profound aesthetic consciousness that transcends appearance. Wabi-Sabi is not a style defined by superficial appearance. It is an aesthetic ideal, a quiet and sensitive state of mind, attainable by learning to see the invisible, paring away what is unnecessary, and knowing where to stop.

Wabi-Sabi is the Japanese art of finding beauty in imperfection and profundity in nature, of accepting the natural cycle of growth, decay, and death. It’s simple, slow, and uncluttered, and, above all, it reveres authenticity.

Ring the bells that still can ring

There’s a crack in everything

That’s how the light gets in. 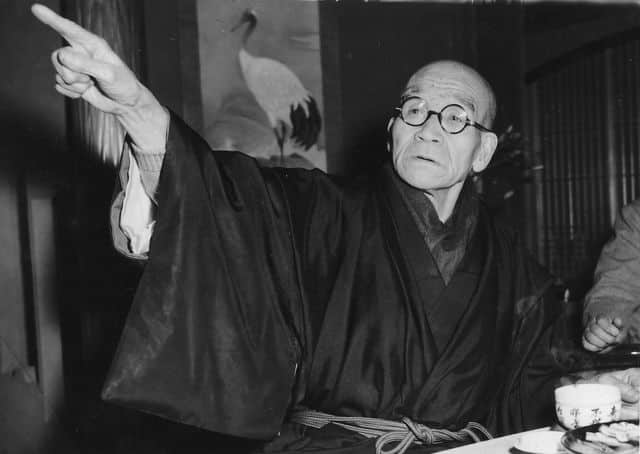