Zen – In a PeanutShell – The Zen Universe

Millions of people today are fascinated by Zen, even though Zen teaches them to believe in “nothing” and that everything is illusory and impermanent. Zen accepts only one reality. This is termed “Not Two”, “Only Mind”, “Buddha Nature”, etc.

Zen is the Japanese form of the Sanskrit word dhyana, “meditation,” and is a school of Buddhism which has had the significant impact in Japan, in Europe and America. Founded in China by the Indian monk Bodhidharma (the 28th Indian patriarch of Zen, and the first Chinese patriarch) in the 6th century C.E. as the Ch’an school of Mahayana Buddhism, Zen spread to Korea in the 7th century CE and to Japan in the 12th century CE.

Buddhism was introduced into Japan in the 8th century, but Zen was not introduced as a separate school in Japan until the 12th century when Nonin established the Daruma-school. In 1189 Nonin sent two students to China, to meet with Cho-an Te-kuang, and ask for the recognition of Nonin as a Zen-master. This recognition was granted.

In 1168, Eisai traveled to China, where he studied Tendai for twenty years. In 1187, he went to China again and returned to establish a Linji lineage, which is known in Japan as Rinzai.

In 1215, Dogen, a younger contemporary of Eisai’s, journeyed to China himself, where he became a disciple of the Caodong master Tendo Nyojo. After his return, Dogen established the Soto school, the Japanese branch of Caodong.

Zen’s golden age began with the Sixth Patriarch, Hui-neng (638-713), and ended with the persecution of Buddhism in China in the middle of the 9th century CE. Most of those we think of today as the great Zen masters came from this period.

Zen began in China (where it is called Ch’an) in the 6th century CE. Its introduction to China is generally attributed to Bodhidharma, a South Indian monk who arrived in China in about 520 CE. Its philosophical background can be found in the Lankavatara Sutra, which was composed in the 4th century or earlier in India. As it developed in China, it was also influenced by Taoist concepts. This is especially apparent in the Ch’an emphasis on spontaneity and naturalness in all things, which significantly influenced Chinese painting, writing, and other arts.

Zen Buddhism arrived in Japan in the 7th century but did not develop significantly there until the 12th century. Zen has had considerable influence on Japanese culture, including gardening, ink painting, calligraphy, the tea ceremony, and even military strategies.

Several schools of Zen developed in China in the 9th century. The two largest divisions of Zen in Japan are Rinzai and Soto.

Rinzai (Chinese, Lin-chi) sect of Zen was introduced to Japan by the Chinese priest Ensai in 1191. Rinzai Buddhism emphasizes the use of koans, paradoxical puzzles or questions that help the practitioner to overcome the normal boundaries of logic. Koans are often accompanied by shouts or slaps from the master, intended to bring the instant realization of the truth.

Soto (Chinese, Ts’ao-tung) is another Zen sect that was transmitted from China to Japan. It arrived in Japan in 1227 upon the teacher Dogen’s return from China. Soto emphasizes zazen, or sitting meditation, as the means to attain enlightenment. The Soto practitioner is encouraged to clear the mind of all thoughts and concepts, without making any effort towards enlightenment, until enlightenment occurs.

Soto is the largest of the three traditional sects of Zen in Japanese Buddhism. It emphasizes meditation and the inseparable nature of practice and insight. Its founder, Dogen, is still highly revered. The Antaiji-based lineage of Kodo Sawaki is widespread, Sawaki being regarded as one of the greatest Zen Masters of recent times. Soto has gained prominence via Shunryu Suzuki, who established the San Francisco Zen Center. Taisen Deshimaru, a disciple of Kodo Sawaki, was a Soto Zen Master from Japan who taught in France and established Association Zen Internationale. The Katagiri lineage, founded by Dainin Katagiri, has a significant presence in the Midwest. With about 14,000 temples, Soto is one of the largest Japanese Buddhist organizations.

Rinzai emphasizes koan study and kensho. The Rinzai organization includes fifteen subschools based on temple affiliation. The best known of these main temples are Myoshin-ji, Nanzen-ji, Tenryū-ji, Daitoku-ji, and Tofuku-ji. Rinzai gained prominence in the West via D.T. Suzuki and the lineage of Soen Nakagawa and his student Eido Shimano. Soen Nakagawa had personal ties to Yamada Koun, the dharma heir of Hakuun Yasutani, who founded the Sanbo Kyodan. In Europe, there is Egely Monastery established by a Dharma Heir of Eido Shimano, Denko Mortensen.

Obaku is a small branch, which organizationally is part of the Rinzai school. It was established in 1661 by a small faction of masters from China and their Japanese students at Manpuku-ji in Uji, Japan.

The Sanbo Kyodanis a small Japanese school, established by Hakuun Yasutani, which has been very influential in the West. Well-known teachers from this school are Philip Kapleau and Taizan Maezumi. Sanbo Kyodan Zen is based primarily on the Soto tradition but also incorporates Rinzai-style koan practice.

Zen, in its simpler form, is taught, not so much through dogmatic scripture, as it is through simply guiding and waiting for the student to realize the Truth. This means that the Master is an authority figure, and it means that Enlightenment comes through realization. The work a student does is to prepare himself/herself for the realization–to prepare the ground so that when the seed of enlightenment falls, it has fertile ground in which it will take root. The realization comes in spite of the work, not because of it.

– Zen teaches that there is no objective world “out there,” that it is all in the mind; or, more accurately, since the separate mind does not exist, everything is an illusory manifestation of “Only Mind,” or the ultimate reality. The goal of Zen meditation is, therefore, to recognize the oneness (to experience one’s true nature) and then to reconcile, or harmonize, the oneness with the illusory duality. At this point, no observer or reconciler exists, for there is no consciousness of a division between the observer and what is observed.

– Zen teaches that one does not need to study sacred texts, worship deities, or do elaborate religious rituals to achieve enlightenment. Rather, one needs to break through the boundaries of conventional thought using meditation and experience the world as it truly is at the moment. Zen teaches that this was the way the Buddha himself attained enlightenment.

– Zen teaches that all the human beings have the capacity to attain enlightenment because they all have an inherent Buddha-nature; that are, all, already enlightened beings, but their true potential has been clouded by ignorance. According to some Zen traditions, this ignorance is overcome through a sudden breakthrough — called satori — during meditation in which the true nature of reality, and our experience of it, is revealed.

Soikei-an stated: “Though all day long you are speaking, raising your eyebrows, standing, sitting, walking and lying, nevertheless in reality nothing has happened.” Huang Po asserted quaintly: “There has never been a single thing.” “The arising and the elimination of illusion are both illusory. Illusion is not something rooted in Reality; it exists because of your dualistic thinking.”

Huang Po said: “In the teaching of the Three Vehicles it is clearly explained that the ordinary and Enlightened minds are illusions…. As thought or sensation arises, you fall into dualism [illusion]…. There is no this and no that…. Just as those categories [enlightened; ordinary] have no real existence, so Mind is really not ‘mind.’ ‘And, as both Mind and those categories are really illusions wherever can you hope to find anything?’”

According to tradition, Zen originated in India, when the Buddha held up a flower and Mahakasyapa smiled. With this smile, he showed that he had understood the wordless essence of the dharma. This way the dharma was transmitted to Kasyappa, the second patriarch of Zen.

Despite the apparent simplicity of the message of Zen, training is arduous and requires guidance from a master, because it is a simplicity that can take a lifetime to achieve.

Mindfulness
There are many different ways of understanding mindfulness
13303 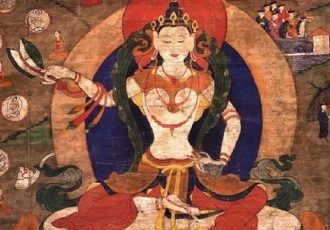 History Archives – The Zen Universe
And how does a monk live contemplating the body in the body?
0197