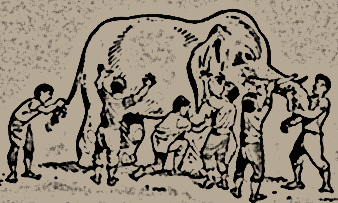 Anekāntavāda meaning ”non-absolutism” or “many-sidedness” or ”theory of several assertions” refers to the principles of pluralism and multiplicity of viewpoints, or vantage points. Anekāntavāda represents the idea that reality is perceived differently from diverse points of view, and that no single point of view represents the complete truth, yet taken together they comprise the complete truth.

It is one of the basic principles of Jainism that encourages acceptance of relativism and pluralism. Jain logic and metaphysics have developed the theory called ‘anekāntavāda,’ ‘syādvāda’ or ‘sapta-bhaṅgīnaya’ according to which seven assertions are possible with regard to everything. Though these assertions are seemingly contradictory, they are possible.

The theory derives its name from the fact that ‘ekānta’ or one absolute assertion cannot be (‘na’) made about anything (na + ekānta = anekānta). Since the possible statements contain the word ‘syād’ (‘may be so’), it is called ‘syādvāda.’ Since the number of such alternatives or possibilities is seven it is also called ‘saptabhaṅginaya’ (sapta = seven, bhaṅgī = mode, naya = standpoint; seven modes of expression from different standpoints). The dialectical concepts of syādvāda “conditioned viewpoints” and nayavāda “partial viewpoints” arose from anekāntavāda, providing it with more detailed logical structure and expression.

The origins of anekāntavāda can be traced back to the teachings of Mahāvīra (599–527 BCE), the 24th Jain Tīrthankara. Mahavira employed Anekanta extensively to explain the Jain philosophical concepts. Māhavīra’s responses to various questions recorded in Bhagvatisūtra demonstrates a recognition that there are complex and multiple aspects of truth and reality and a mutually exclusive approach cannot be taken to explain such reality.

The word anekāntavāda is a compound of two Sanskrit words: Anekānta “manifoldness” and vāda “school of thought.” The term anekānta consists of the Sanskrit negative prefix an, the number one eka and the word for “attribute,” anta—”not of solitary attribute.” The Sanskrit compound an-eka-anta-vāda literally means “doctrine of uncertainty” (an- “not”, ekānta “certainty” or “single-natured”, vāda (“school of thought” or “thesis”). As opposed to it, ekānta (eka+anta “solitary attribute”) is one-sidedness.

Jains compare all attempts to proclaim absolute truth with adhgajanyāyah or the “maxim of the blind men and elephant.” In this story, one man felt the trunk, another the ears and another the tail. All the blind men claimed to explain the true appearance of the elephant, but could only partly succeed, due to their narrow perspectives.

The Jain Doctrine of Non-Absolutism, anekāntavāda, is a logical system that functions in part to identify and refute views which claim to be absolutely true although can be considered only partially true according to Jain metaphysics and logic.

Jain doctrine states that objects have infinite modes of existence and qualities so they cannot be completely grasped in all aspects and manifestations by finite human perception. Only the Kevalins—the omniscient beings—can comprehend objects in all aspects and manifestations; others are capable of only partial knowledge. Consequently, no specific human view can claim to represent the absolute truth. The reality is complex and multifaceted, and each perspective is qualified from a view-point. Even an omniscient Teaching God (Tīrthankara), possessing and perceiving infinite knowledge cannot express reality completely because of limitations of language, which is of human creation. Syncretization of changing and unchanging reality is achieved through Anekantavaad.

Ācārya Haribhadra, one of the leading proponent of anekānta, was the first classical author to write a doxography, a compendium of a variety of intellectual views which, rather than espousing narrow partisan views, attempted to contextualise the Jain thoughts within the broad framework of possible intellectual orientations available to Indian thinkers around the eighth century C.E.
Going beyond anekānta, Yasovijayaji, seventeenth century Jain monk, advocated madhayastha, meaning “standing in middle or equidistant,” a position that allowed him to praise the qualities in others even though they may be non-Jain and belonging to other faiths.

Anekāntavāda encourages its adherents to consider the views and beliefs of their rivals and opposing parties. Proponents of anekantvāda apply this principle to religion and philosophy, reminding themselves that any religion or philosophy, even Jainism, which clings too dogmatically to its own tenets, is committing an error based on its limited point of view.

Thus, Anekantavada teaches us that the kingdom of truth can be reached through different ways.  It also teaches us that we should not impose our own thoughts or views on others, but should try to reconcile with the thoughts or view‑points of others.  This principle, therefore, if earnestly put into practice shows us how to remove our short‑sighted, selfish and partial outlook.