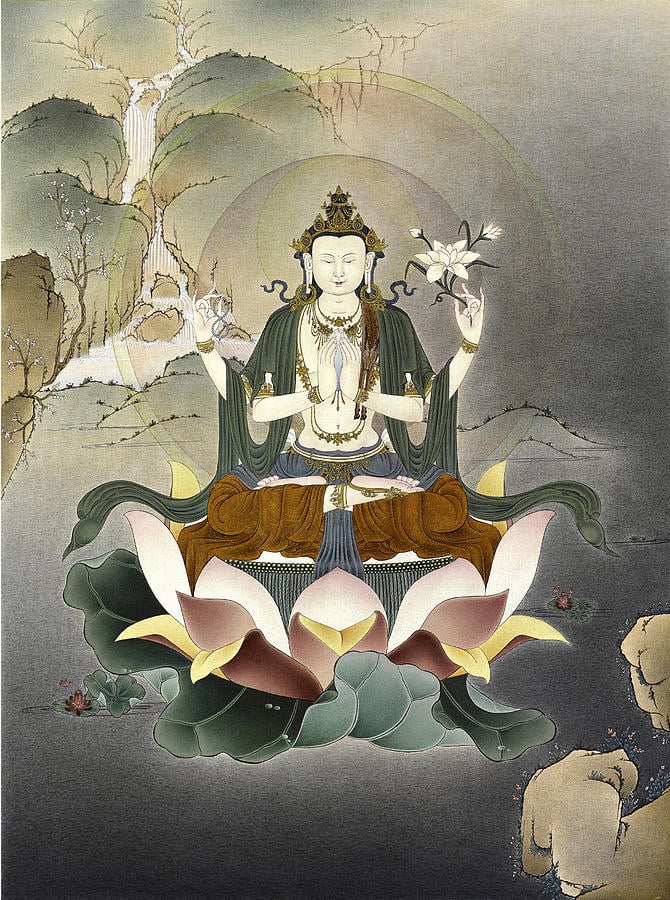 Avalokitesvara is possibly the most popular of all Buddhist deities, beloved throughout the Buddhist world. The great vow of Avalokitesvara is to listen to the supplications from those in difficulty in the world, and to postpone his own Buddhahood until he has helped every being on earth achieving enlightenment. In Mahayana Buddhism, he is treated as the embodiment of all the Buddhas’ infinite compassion.

Avalokitesvara (avalokita = observe, isvara = unimpeded) is a Sanskrit term, masculine in gender, that translates as Lord Who Regards All. Kannon (Chinese – Guanyin or Kuan Yin) literally means watchful listening, and is often translated as “one who sees / hears all.” Another Japanese name for Kannon is Kanzeon, the one who constantly surveys (kan) the world (ze) listening for the sounds (on) of suffering. It was later shortened to Kannon.

Kannon’s origins are unclear, but most scholars agree that Kannon worship began in India around the 1st or 2nd century AD, and then spread to Southeast Asia, China, Korea, and most other Asian nations. Veneration of Kannon in Japan began in the 6th century.

Originally male in form, in present times Kannon is often portrayed as female in China, Japan, and other East Asian countries. In the earliest representations, the buddhist artisans carved the faces, bodies, and robes with masculine features, then Kannon statues started to be portrayed as asexual or genderless, or with attributes of both genders, in ways that transcended male and female forms, and eventually Kannon became a symbol of the divine feminine, the divine mother in both China and Japan. Nonetheless, the orthodox view is that all Buddha and Bodhisattva are male.

There are many famous legends about Kannon/Avalokitesvara:

One legend says that Kannon is the spiritual son of Amitabha (Amida), but another one says that Avalokiteshvara is the earthly manifestation of the self-born eternal Buddha Amitabha, whose figure is represented in his headdress, and he guards the world in the interval between the departure of the historical Buddha, Gautama, and the appearance of the future buddha, Maitreya.

According to legend, his head once split with grief at realizing the number of wicked beings in the world yet to be saved. Amitabha caused each of the pieces to become a whole head and placed them on his son in three tiers of three, then the 10th, and topped them all with his own image.

The Chinese tradition says that Kuan-yin (Kannon) was born into this world as the daughter of the King of the Chow Dynasty. Sentenced to death by her father for refusing to marry, she was sent to the executioner’s block, where it is said the executioner’s sword broke without inflicting a wound. Other Chinese legend tells us that her spirit was once transported to the underworld, where King Yama, the lord of hell, attended to her with great respect. But her radiance turned hell into paradise, so King Yama sent her back to earth again, transporting her on a lotus flower.

In the legend of Miaoshan, the king’s daughter gives up her own eyes and arms to help cure her ailing father.

In another legend, a beautiful girl in the countryside was much sought after for marriage by eligible young men. As the number of men who were eager to marry her was large, she put forth a condition that she would marry the man who would memorize the Guanyin chapter of the Lotus Sutra in one night. Twenty men succeeded in doing this, but because there were still too many for the marriage, she again made a request that they should learn by heart the Vajracchedika sutra overnight. Once again, there were still too many. The girl’s third condition was that he who memorized the entire Lotus Sutra in just three days would marry her. A man, named Ma Lang, was the only one who could accomplish this, and so the marriage was to be prepared. But the girl got sick and died. Soon after the burial an old priest visited Ma Lang and requested him to dig up the grave. The coffin contained only pieces of golden bones. The old priest said that the girl was a manifestation of Guanyin, who had come to lead people to salvation. After saying this, the old man too vanished.

Miracle stories about Kannon – imported originally from China, were particularly widespread in old Japan. One of Japan’s oldest collections was compiled in the early ninth century by the Japanese monk Kyokai, the title of this three-volume work is “Miraculous Stories of Karmic Retribution of Good and Evil in Japan”.

Kannon’s ability to assume innumerable forms has led to various representations. There are seven major representations: (1) Sho Kannon, the simplest form, usually shown as a seated or standing figure with two hands, one of which holds a lotus, (2) Ju-ichi-men Kannon, a two-or four-handed figure with 11 heads, (3) Senju Kannon, the bodhisattva with 1,000 arms, (4) Jun-tei Kannon, one of the least-common forms, represented as a seated figure with 18 arms, sometimes related to the Indian goddess Chunti (mother of 700,000 buddhas), (5) Fuku-kenjaku Kannon, a form popular with the Tendai (Tiantai) sect, whose special emblem is the lasso, (6) Ba-to Kannon, shown with a fierce face and a horse’s head in the hairdress, probably related to the Tibetan protector of horses, Hayagriva, and (7) Nyo-i-rin Kannon, shown seated, with six arms, holding the wish-fulfilling jewel.

Kannon is mentioned in numerous Mahayana Sutras, especially the Lotus Sutra, which was translated into Chinese by Kumarajiva, who rendered Kannon’s name as “One Who Observes the Sounds of the World.” Kannon also appears in the Kegonkyo (Skt. – Avatamsaka Sutra) and Hannya Shingyo (Skt. – Prajnaparamita Sutra; English – Heart Sutra), as well as in scriptures of the Pure Land school like the Muryoju-kyo, and in tantric (esoteric) texts such as Juichimen Kanzeon Shinju-kyo and Senju Sengen Darani-kyo.

Avalokitesvara was introduced into Tibet in the 7th century, where he quickly became the most-popular figure in the pantheon, successively reincarnated in each Dalai Lama. He is credited with introducing the prayer formula om mani padme huṃ, frequently translated as “the jewel is in the lotus”. He is the tutelary god of Tibet.

In Hinduism, he is equated with Vishnu. In cosmic mythology he is considered a creator god. His Shakti is Pandara, and his attendant animal is a lion. His colors are white and red; and his attributes are the blue lotus, rosary, sword, and water jar.

In Mongolia, Avalokitesvara is called He Who Looks With the Eyes. The title used for him in Indochina and Thailand is Lokesvara (Lord of the World).

Sometimes the 11-headed Avalokitesvara is represented with thousands of arms, which rise like the outspread tail of a peacock around him. In painting, he is usually shown white in colour (in Nepal, red). His female consort is the goddess Tara. His traditional residence is the mountain Potala, and his images are frequently placed on hilltops (Tibet and Nepal).

From his tears were born the Goddess Tara, whose two principle forms are White Tara and Green Tara.

He is the creator of the fourth world, which is the actual universe.