Dazu Huike – Taiso Eka (487-593) is considered the Second Patriarch of Chinese Chan and the twenty-ninth since Gautama Buddha.

As with most of the early Chan patriarchs, very little data is available about his life. It is said that Huike was born in Hu-lao (Ssu-shui hsien, Henan) and his secular name was Shen-kuang (Japanese: Shinko). A scholar in both Buddhist scriptures and classical Chinese texts, including Taoism, Huike although was considered enlightened, has been criticised for not having a teacher. He finally met his teacher, Bodhidharma, at the Shaolin Monastery in 528 when he was about forty years old, and studied with Bodhidharma for six years (some sources say four years, five years, or nine years).

The legend says that Bodhidharma initially refused to teach Huike, and Huike stood in the snow outside Bodhidharma’s cave, all night until the snow reached his waist. In the morning, Bodhidharma asked him why he was there, and Huike replied that “he wanted a teacher to open the gate of the elixir or universal compassion to liberate all beings”. Bodhidharma refused, saying, “how can you hope for true religion with little virtue, a little wisdom, a shallow heart, and an arrogant mind? It would just be a waste of effort.” Finally, to prove his resolve, Huike cut off his left arm and presented it to the First Patriarch as a token of his sincerity – at which point Bodhidharma accepted him as a student and changed his name from Shenguang to Huike (“Wisdom and Capacity”).

Huike said to Bodhidharma, “My mind is anxious. Please pacify it.”

Bodhidharma replied, “Bring me your mind, and I will pacify it.”

Huike said, “Although I’ve sought it, I cannot find it.”

“There,” Bodhidharma replied, “I have pacified your mind.”

According to the Denkoroku, when Huike and Bodhidharma were climbing up Few Houses Peak, Bodhidharma asked, “Where are we going?” Huike replied, “Please go right ahead—that’s it.” Bodhidharma retorted, “If you go right ahead, you cannot move a step.” Upon hearing these words, Huike was enlightened. Legend says that Bodhidharma wished to return to India, and called together his disciples and the following exchange took part.

Bodhidharma asked, “Can each of you say something to demonstrate your understanding?”

Bodhidharma: “You have attained my skin.”

The nun Zong Chi stepped up and said, “It is like a glorious glimpse of the realm of Akshobhya Buddha . Seen once, it need not be seen again.”

Bodhidharma; “You have attained my flesh.”

Dao Yu said, “The four elements are all empty. The five skandhas are without actual existence. Not a single dharma can be grasped.”

Bodhidharma: “You have attained my bones.”

Finally, Huike came forth, bowed deeply in silence and stood up straight.

Bodhidharma said, “You have attained my marrow.”

Bodhidharma passed on the symbolic robe and bowl of dharma succession to Huike and, as some texts claim, a copy of the Lankavatara Sutra. Bodhidharma then either returned to India or died.

Huike went to Yedu (modern Henan) around 534 and, except for a period of political turmoil and Buddhist persecution in 574, lived in the area Yedu and Wei (modern Hebei) for the rest of his life. It was during the time of upheaval that Huike sought refuge in the mountains near the Yangtze River, and met Sengcan who was to become his successor – and the Third Chinese Patriarch of Chan.

In 579, Huike returned to Yedu and started to expound the dharma, attracting large numbers of people, and arousing the hostility of other Buddhist teachers, one of whom, Tao-heng, paid money to have Huike killed (but Huike converted him).

Some traditions claim that Huike was executed after complaints – about his teachings – by influential Buddhist priests. One story says that blood did not flow from his decapitated body, but rather, a white milky substance flowed through his neck.

There is some evidence that both Huike and Bodhidharma based their teachings on the Lankavatara Sutra – although this cannot be firmly established by modern scholars. This sutra urges ‘self-enlightenment’, the “forgetting of words and thoughts”.

Tao-hsuan referred to Huike (and others) as dhyana masters (ch’an-shih or zenji) highlighting in those early years of Chan development the importance of meditation practice (which Tao-hsuan labelled as “wall gazing” or “wall contemplation”).

One of the most important characteristics of the early Chan of Bodhidharma and Huike was the sudden approach to enlightenment rather than the Indian yogic meditation, which advocated concentration and gradual self-perfection.

Originally deluded, one calls the mani-pearl a potsherd

Suddenly one is awakened—and it is [recognized] as a pearl

Ignorance and wisdom are identical, not different. 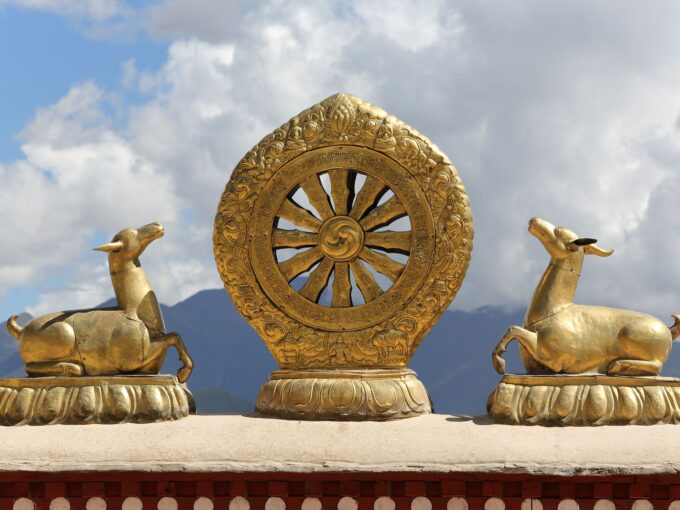