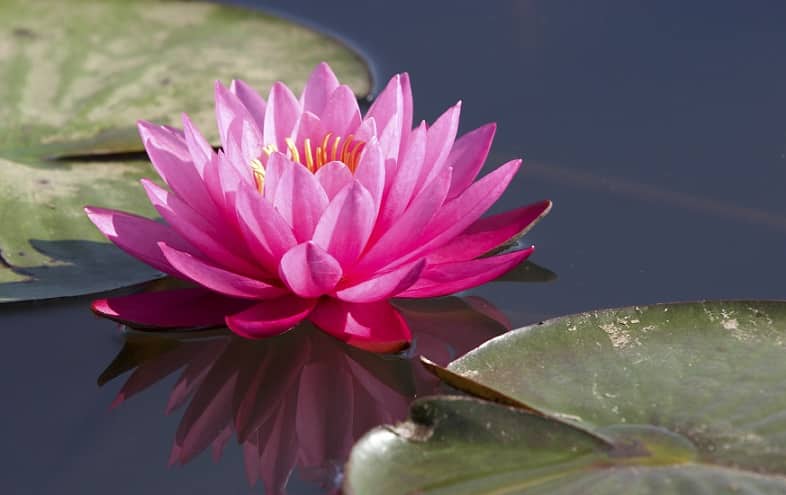 The lotus flower symbol has deep, mythic meaning for many cultures.

The lotus blossom has been revered, attributed to deities, and meditated on for thousands of years.

The mystical lotus bloom appears in poetry, the writings of saints and sages, on temple walls, and as a central concept in several world religions.

Fascination with the lotus blossom can be traced back to ancient Egypt, India, and Asia, appearing in the mythologies and religions of these cultures for thousands of years. Lotus flowers can be found adorning household items, temples, and art throughout all the Asian continent.

The lotus is associated with creation, the afterlife, enlightenment, fertility and sensuality, purity, and health. Many cultures ascribe different virtues to the different colors of the blooms – as well as the number of petals on the bloom.

The lotus is also associated with the system of the 7 chakras, Buddhism, Hinduism, Bahai, and Egyptian myths.

Within Hinduism and Buddhism, the lotus flower represents the awakening of the spiritual consciousness.

In Indian culture, the Lotus flower represents enlightenment, wealth, knowledge, and connection to the divine. It is associated with the goddess of wealth, Maha Lakshmi, who represents purity, prosperity and generosity. She sits on a fully blossomed lotus flower.

In Egypt, the Lotus flower is called Sesen. In Egyptian mythology, the lotus flower is a symbol of the sun, creation and rebirth.

In the Islamic tradition

In the Islamic tradition, it is mentioned that if a person dies in a state of ihram (a purification period before embarking on a pilgrimage) that person should be washed with water that has been perfumed with lotus flowers.

The Chinese lotus flower represents creative power and purity amid adverse surroundings. It is also a symbol of the seventh month, summer. Chinese poets also use lotus flowers to inspire people to continue striving through difficulties, and to show their best part to the outside world, no matter how bad the circumstances may be. Another symbolic characteristic of the Chinese lotus flower leads from the observation that the plant’s stalk is easy to bend in two, but is very hard to break because of its many strong sinuous fibers.

According to Buddhist principles, the heart of a person who has not attained enlightenment is the embodiment of a lotus that has not blossomed yet. Once enlightenment has been reached, their heart becomes a lotus in bloom. This is why depictions of Buddha often show him seated upon an open lotus flower.

A common way of understanding the Buddhist concepts of enlightenment is told through the parable of the lotus. The lotus grows in muddy water, and yet the dirt and muddy waterfall off its leaves and petals, keeping it clean and pure.

The color of the Buddhism Lotus Flower also has significance:

The white lotus symbolizes the state of Bodhi, peace and serenity. It is associated with the White Tara and proclaims her perfect nature, a quality which is reinforced by the color of her body.

The blue lotus symbolizes wisdom. This is a symbol of the victory of the spirit over the senses and signifies the wisdom of knowledge. It is the preferred flower of Manjushri, the bodhisattva of wisdom.

The pink lotus symbolizes the Buddha and enlightenment. This the supreme lotus, generally reserved for the highest deity. Thus, naturally it is associated with the Great Buddha himself.

The golden lotus symbolizes the worlds beyond this one. The golden lotus that is mentioned in Buddhist sutras has two meanings; one is the symbol for the achievement of enlightenment, and the other points towards a real flower which is beyond our normal perception.

In Hinduism lotus flower mythology states that within each person is the spirit of a sacred lotus.

The Bhagavad Gita speaks of the need to strive to be like the lotus blossom, pure of heart so that the muck of earthly matters do not cling to us. It is further mentioned that the atman (the soul) dwells within a lotus flower that is found within the heart (a reference to the heart chakra).

References to the lotus flower symbol are also found in the tradition of hatha yoga, which features sitting in the “lotus position” during meditation as a central core of its practice.

The lotus is also a symbol of the centers of consciousness within the body (the chakra centers). The highest chakra, known as the crown chakra or Sahasrara chakra, is referred to as a thousand-petaled lotus flower.

The lotus flower is one of the most important Buddhist symbols

The lotus flower is one of the most important Buddhist symbols and has it’s own title as one of the Buddhist sacred texts, “The Sutra on the White Lotus of the Sublime Dharma”, also known more simply as the Lotus Sutra, and is mentioned by Buddha repeatedly in his teachings.

In Buddhist symbolism, the lotus is symbolic of the purity of the body, speech, and mind as while rooted in the mud, its flowers blossom on long stalks as if floating above the muddy waters of attachment and desire. It is also symbolic of detachment as drops of water easily slide off its petals.

The lotus is one of the Eight Auspicious Symbols which are recognizable and present in Buddhist traditions around the world. It is symbolic of the purpose of the Noble Eightfold Path, which is the eight steps in Buddhism that bring followers from the suffering of the human condition to a state of enlightenment.

The form of the flower is also important in understanding the symbolism. A lotus can be represented with dozens of petals, but a common number is eight (which represents the Noble Eightfold Path). Multiple stems can represent such things as multiple types of knowledge. A closed bud is symbolic of a human before reaching enlightenment while an open bloom is symbolic of reaching the state of enlightenment.

“As a lotus flower is born in water, grows in water and rises out of water to stand above it unsoiled, so I, born in the world, raised in the world having overcome the world, live unsoiled by the world” (Gautama Buddha).

The Buddhist cosmology reveals Lotus to be the first flower bloomed in the beginning of this cosmic world.

Mindfulness
There are many different ways of understanding mindfulness
12301

Buddhist cosmology – The Zen Universe
The Buddhists, following the traditions of their Indian
0492