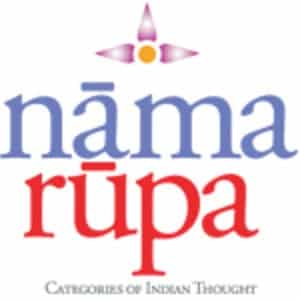 Nama-rupa, sometimes spelled namarupa, is a Sanskrit and Pali term that comes up frequently in Buddhism. It literally means “name and form,” although it is sometimes translated “mind an matter” or “mind and body”. And sometimes “mind and body” is run together into “bodymind.” The term originated in Hinduism, although Hindu teachings about nama-rupa are not exactly the same as Buddhist teachings.

The Buddha (480–400 B.C.E), founder of Buddhism, did not make a distinction between the mind and the body and taught that the world consists of mind and matter which work together, interdependently. Ultimately, the Buddha’s philosophy is that both mind and forms are conditionally arising qualities of an ever-changing universe in which, when nirvāna is attained, all phenomenal experience ceases to exist.

According to the anattā doctrine of the Buddha, the conceptual self is a mere mental construct of an individual entity and is basically an impermanent illusion, sustained by form, sensation, perception, thought and consciousness. The Buddha argued that mentally clinging to any views will result in delusion and stress, since, according to the Buddha, a real self (conceptual self, being the basis of standpoints and views) cannot be found when the mind has clarity.

The relation of mind to matter is like the relation of a battery to an engine of a motor car. The battery helps to start the engine. The engine helps to charge the battery. The combination helps to run the motor car. In the same manner, matter helps the mind to function and the mind helps to set matter in motion.

Buddhism teaches that life is not the property of matter alone, and that the life-process continues or flows as a result of cause and effect. The mental and material elements that compose sentient beings from amoebae to elephant and also to man, existed previously in other forms.

Although some people hold the view that life originates in matter alone, the greatest scientists have accepted that mind precedes matter in order for life to originate. In Buddhism, this concept is called ‘relinking consciousness’.

Each of us, in the ultimate sense, is mind and matter, a compound of mental and material phenomena, and nothing more. Apart from these realities that go to form the nama-rupa compound, there is no self, or soul. The mind part of the compound is what experiences an object. The matter part does not experience anything. When the body is injured, it is not the body that feels the pain, but the mental side. When are hungry it is not the stomach that feels the hunger but again the mind and its factors, makes the body digest the food. Thus neither the nama nor the rupa has any efficient power of its own. One is dependent on the other; one supports the other. Both mind and matter arise because of conditions and perish immediately, and this is happening every moment of our lives. By studying and experiencing these realities we will get insight into what we truly are, what we find around us, how and why we react to what is within and around us, and what we should aspire to reach as a spiritual goal.

To gain insight into the nature of the psycho-physical life is to realize that life is an illusion, a mirage or a bubble, a mere process of becoming and dissolving, or arising and passing away. Whatever exists, arises from causes and conditions.

Namarupa is the universe of our empirical experience. We see the universe and then participate in it through the process of naming everything. By naming something we are able to understand it and obtain a sense of control over it.

The term nāmarūpa is used in Hindu thought, nāma describing the spiritual or essential properties of an object or being, and rūpa the physical presence that it manifests. The distinction between nāma and rūpa in Hindu thought explains the ability of spiritual powers to manifest through inadequate or inanimate vessels – as observed in possession and oracular phenomena, as well as in the presence of the divine in images that are worshiped through pūja.

In Vajrayana, Mahayana, Theravada and Zen Buddhism the concept of bodymind, or namarupa, is key. In Vajrayana, namarupa is informed by the related doctrines of heart-mind and Yogachara’s mindstream. Within these traditions, Bodymind is held as a continuüm and field phenomenon.

Namarupa is the way we identify things, and the way we identify with them. We use feeling, perception, intention, contact, and the direction of our attention to sort out what’s what; we also use the shape of things, their physical, material forms. These habits of thought are the fields in which we grow the things we do that are sankhara-based.