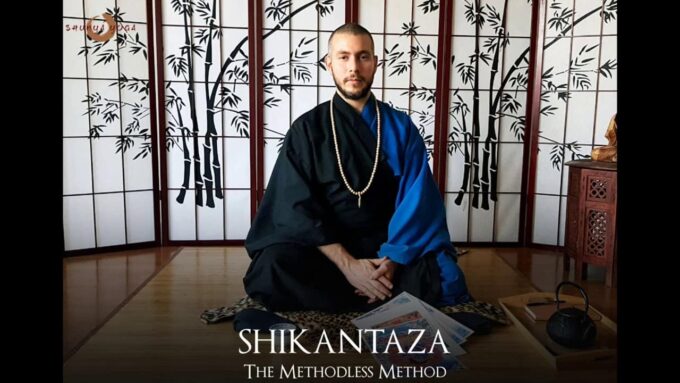 1.     Shikantaza as the essential doctrine of Soto Zen Buddhism

In the Sotoshu Constitution (Sotoshu Shuken), Soto Zen Buddhist doctrine (Shushi) is set down as “. . . abiding by the True Dharma singularly transmitted by the Buddha-ancestors, the Sotoshu doctrine is to realize shikantaza (just sitting) and sokushinzebutsu (Mind itself is Buddha).”

This means that we as followers of Soto Zen Buddhism should practice shikantaza according to the correct Dharma purely transmitted by the Buddha-ancestors. Properly transmitted zazen is a wondrous and essential art for all Buddha Tathagatas who have been transmitting inconceivable dharma to actualize unsurpassable, complete awakening. Zazen is the authentic gate to free ourselves into the realm of self-receptive samadhi (jijiyu zanmai).

In Chinese, the expression shikantaza is vernacular speech. ”Shikan” implies “to be solely concerned about.” “Taza” means “to sit.” So shikantaza means “to be solely concerned about just sitting.” This expression has been emphasized in Soto Zen Buddhism under the strong influence of Zen Master Tendo Nyojo (T’ien-t’ung Ju-ching). He was the main teacher of Zen Master Eihei Dogen, who founded Eiheiji Monastery.

Although this expression is not found in The Recorded Sayings of Zen Master Nyojo, but in Hokyoki Zen Master Dogen said:

Zen Master Keizan said of Zen Master Nyojo； “He always excelled in zazen” (Zen Master Keizan’s Denkoroku, chapter 50). As we can see in The Sayings of Zen Master Eihei Dogen (Shobogenzo Zuimonki), Zen Master Nyojo personally practiced zazen very diligently. He integrated zazen as an important element of monastic training even though he was criticized for it. In the fascicle of “Buddha Sutras” (Bukkyo) in Shobogenzo, Dogen says that Zen Master Nyojo “always” talked about the extreme importance of shikantaza. This suggests that in his ordinary sermons he strongly inspired disciples to practice shikantaza.

In the chapter of “Xuefeng’s Enlightenment at Mt. Ao Shao in Tu-Tang-Ji” (Sodoshu）, we find the word “shikantaza” paired with “shikantasui” (just sleeping). But later in “Tahui’s Shobogenzo,” they were respectively changed to ikkouzazen (single-minded zazen) and tadakoretasui (daily sleeping). By shikantaza Zen Masters Nyojo and Dogen tried to convey the idea of both “single-mindedly” and “daily”. We practice zazen on a daily basis but it should be practiced “single-mindedly” instead of being done as a common routine. It is because we admire and yearn for the Buddha-ancestors who practiced shikantaza and feel deeply moved by Bodhi-mind to continue the wisdom/life of Buddha-ancestors that we accept and settle down in the practice of shikantaza.

Shikantaza has two aspects of emphasis:

As for the first aspect, Zen Master Nyojo rejected practices other than zazen, from incense-burning to reading sutras in the sayings quoted above. This rejection has several dimensions. The first is the superior religious value of zazen when compared with other practices. In Shobogenzo Zuimonki, book six, Zen Master Dogen replied to a practitioner who compared zazen with koan practice, “Even if you may seem to have some understanding while reading koans, the attainment of enlightenment is due to the merit of sitting zazen.” At a jodo at Eiheiji, he said,”The true Dharma correctly transmitted by Buddha-ancestors is simply just sitting.” (Eihei Koroku vol. 4-319, jodo). We can see that he rejected other types of practice and emphasized zazen as the most important practice.

However, Dogen wrote a fascicle on “Reading Sutras“ (Kankin). Also, there is a phrase about “sutra reading and recitation of Buddha names” in his Eiheiji Chiji Shingi. This implies that Dogen did not totally exclude other practices in monastic training. Dogen describes the proper relationship between shikantaza and Buddhist sutras as “. . . the practice of sitting zazen is unquestionably a Buddha sutra from beginning to end and from end to beginning” (Shobogenzo Bukkyo – “Buddha’s Sutras”).

By this Dogen means that zazen is a Buddha’s sutra. In the same way, it can be said that a Buddha’s sutra is zazen. Therefore, at Daibutsuji (Eiheiji) where daily observances centered around zazen, based on “Bendoho (“Model for Engaging the Way”) were established, an essential point of monastic training was undoubtedly shikantaza. Because of this, Dogen encouraged practitioners to favor zazen over other practices. He emphasized that they must practice zazen “to the exclusion of all other activities” as the Fifth Ancestor Hongren on Mt. Huangmei did (Shobogenzo Zazengi – “Instructions for Zazen”).

As for the second aspect, if we do practice as a means to an end, that practice would end its role when the goal is accomplished. However, in Fukanzazengi Zen Master Dogen points out the example of Shakyamuni Buddha who sat upright zazen for six years, although he was wise enough to know the Buddha Dharma at birth. He also mentions Bodhidharma, who sat facing a wall for nine years after coming to China though he had already attained the mind-seal.

Dogen stresses that Buddha-ancestors do not practice zazen as a means to an end. Therefore, as is said in Gakudo Yojinshu, “Realization lies in practice.”

Enlightenment is clearly manifested in the Buddha-ancestors’ zazen. In the same vein, in Bendowa Zen Master Dogen wrote, “To suppose that practice and realization are not one is a view of those outside the way. In Buddha Dharma they are inseparable.” He states that when instructing beginners we must teach them not to expect realization outside of practice. Practice is the immediate, original realization.

The practice of beginner’s mind is itself the entire original realization. Dogen clearly distinguishes the zazen of Buddha-ancestors from the zazen of other schools. The principle of zazen in other schools is to wait for enlightenment. For example, to practice is like crossing over a great ocean on a raft, thinking that having crossed the ocean one should discard the raft.

The zazen of Buddha-ancestors is not like this, but is simply Buddha’s practice. We could say that the situation of Buddha’s house is the one in which the essence, practice, and expounding are one and the same. (Eihei Koroku, vol. 8:11).

In other schools zazen is a means to gain enlightenment. Like a raft, it is no longer useful when the goal is achieved. Some people boast about their experiences of great enlightenment and kensho. If their zazen practice regresses because of such an experience, that experience is nothing but a delusion that becomes a hindrance to the continuation of practice.

Buddhist cosmology – The Zen Universe
The Buddhists, following the traditions of their Indian
0476