More than fifty years have gone by since the death of Sawaki Rōshi, a leading figure in the world of Zen who was active from the twenties to 1965. Even today, the immense influence that he has had on our society can be felt.

Master Kodo Sawaki was born on the 16th. of June 1880 in Tsu-city in Mie Prefecture in the west of Japan. Kodo Sawaki was born the sixth child in a family of a factory worker, a well-off family of seven brothers, near to the shrine at Ise. He was called Tsaikichi. When he was five years old, his mother died and, at the age of eight, his father died too. His sisters and brothers were divided among the families of relatives or became servants,  but none of his relatives wanted to adopt him because they said he was a very difficult boy to deal with. Eventually, Sawaki was adopted by an aunt whose husband soon died, so he had to move again. Then, Sawaki went to live in the house of a gambler and lantern maker named Bunkichi Sawaki, an unstable and lazy man who only believed in “tobacco and sex”, and who had had eleven wives. The latest of whom was a prostitute. They lived at the back of a brothel so that their house was a hotbed for a gang of hooligans, and a lot of gambling took place in their house, day and night.

At thirteen years of age, Tsaikichi was obliged to work in order to eat and, in this turbulent neighborhood, he became supervisor of the gamblers’ accounts. After having been present at the death of an old man of advanced age in a brothel, he was made brutally aware that he did not wish to end his life in such a dishonorable fashion. This incident drew him to the way of Buddhism.

He came in contact with the family of Morita Soshichi, well-educated people, honest and pure, who were scraping out a living in a run-down backhouse. The father glued calligraphy rolls while the son studied traditional Japanese painting. Tsaikichi felt drawn to this family, whose life, although it took place in the most impoverished conditions, had something very pure about it.

He began to come and go at the Morita home, where he studied old Chinese and Japanese history and literature from the father of the Morita family. Moreover, he learned the truth that there are things in life more important than money, position, and fame. Later, Sawaki Rōshi himself said that this was how the bud formed, out of which the fruit of his later life ripened.

He started frequenting a Shinshu temple and, when he was tempted to become a monk to escape from his family, a Shinshu priest suggested he could better orient himself towards Zen.

In 1896, at the age of 17, he left for Eihei-ji, taking with him no money, and having only two small packets of rice with him. Over four days and night, he arrived there. After standing at the gate of the temple for two days and nights, he was finally accepted as a temple laborer. Upon arrival, the problems began. Being a stranger, he could not become a monk and had to accept a place as a servant, which allowed him, in spite of everything, to learn zazen.

However, he said that he found that there are just ordinary people living at Eihei-ji, and many young trainee priests were very brazen and were just interested in eating lots of food and drinking lots of sake. Life at Eihei-ji was not what he expected, was not in a state of enlightenment. Consequently, he did not stay there for a long time. At the age of eighteen, he left Eihei-ji, and went to Soushin-ji in Kumamoto, which is in the southern part of Japan, and met Master Koho, who later gave him the precepts – tokudo (ordination), in the temple of Kyûshû, and he became monk with the the name Kôdô. He stayed two years with this teacher. Later, he met another teacher, in the person of Fueoka Sunum, who taught him the right way: don’t search for satori or any other thing. Simply sit in zazen.

This teacher-disciple relationship lasted a year and was interrupted by Kodo’s conscription into the army in 1900. In 1904, during the Russo-Japanese war, he was placed with the infantry where he was seriously wounded (and earned a golden medal). He then returned to Japan to receive medical care and to convalesce. In 1905, he was sent once more to China, where he remained until the end of the war. At the age of 26, in the year 1906, he returned to Japan.

After the war he entered the Academy for Buddhist studies in his home town. After which he transferred to the seminar of Hōryū-ji in Nara where he studied Yogacara philosophy under the abbot Saeki Jōin Sōjō. In 1912, he became the principal assistant in the dojo, the tantô, de Yôsen-ji. There, he followed a period of solitude concentrated on the practice of zazen, in a small temple in the province of Nara. In 1916, he abandoned this retreat to become a reader, kôshi, in Daiji-ji Sôdô.

Later, in 1922, he left Daiji-ji to live in the house of a friend. In 1923, he began traveling throughout Japan giving conferences and directing sesshins. When he was 55, he was appointed professor at Komazawa University where he gave conferences about zen literature, and where he directed the practice of zazen. At the same time, he became godō (a head teacher) at Sōji-ji, one of the two main temples of the Sōtō school. This began the period of Sawaki Rōshi’s greatest activity. Until just before the beginning of war, in 1940, Kôdô Sawaki also led a large temple in the mountain, the Tengyô Zen-en.

In 1949, he took responsibility for Antai-ji, a zen temple in northern Kyoto, but he was not a conventional abbot since he kept traveling throughout Japan to teach Zen and shikantaza.

In 1963, at 86 years of age, he fell gravely ill and he retired to Antai-ji (the temple which he had transformed into a place of pure practice). From his bed, he spent long periods looking at the mountain of Takagamine. There, three days before his death, he told a nun:

«Look! Nature is magnificent. I understand the problems of men. Never in all my life, have I met anyone to whom I should submit or whom I could admire. But Mount Takagamine looks at me always, saying from above: “Kôdô, Kôdô.”»

He was called “Kodo without a home” or “Homeless Kodo” because he refused to remain in a temple and always traveled alone. Kodo Sawaki never lived in his own temple and also did not write any books. He brought with him, a breath of fresh air to the moribund zen, reintroducing the universal practice of zazen.

Kodo Sawaki is the 82nd generation in Shakyamuni‘s legacy in Sôtô Zen tradition. He has been the teacher of many spiritual heirs in Japan among whom was Mokudô Taisen Deshimaru, who received monk ordination from him.

Sawaki Rōshi is known for his rigorous emphasis on zazen, in particular, the practice of shikantaza, or “just sitting” and he was the first in our era to reintroduce shikantaza in its pure form and revive it as being equally valid as kōan Zen. He often called Zen “wonderfully useless,” discouraging any gaining idea or seeking after special experiences or states of consciousness. 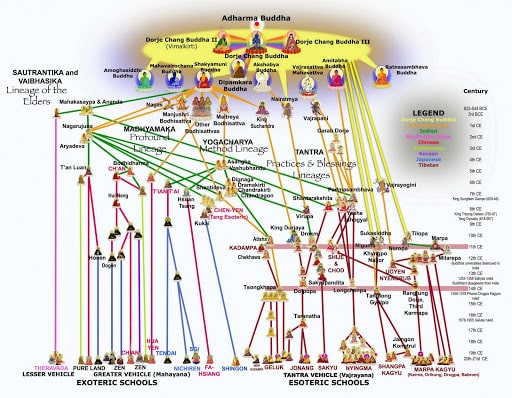