Embarking on the Buddha Way, or in other words, starting Zen practice, is in many ways a journey of discovery. The first few months, years even, could be described as an intense self-digging process, at times confusing and overwhelming but also rewarding and eye-opening.

In the beginning, someone who just starts doing Zazen, the essence of Zen, becomes acutely aware of time, as in counting every second, minute, hour or day. But when this practice becomes an ingrained daily habit, within a temple and a sangha, instead of measuring your commitment in terms of time, or chunks of time, you begin seeing it more as an one-step-a-day journey. And if sewing the rakusu teaches anyone anything, other than sewing skills, that is to take things one tiny dot at a time. One breath at a time. One step at a time. Simply put, you become present in your present.

So why am I talking about time when the point of this article is “why practice”? For two reasons: the first is that “how long have you been practicing for?” and “why are you practicing?” are two of the most commonly-asked questions by the new-comers at our temple.

The second reason is that, no matter how different they may seem, these two subjects are tightly, even intimately, connected to each other in the sense that, we can only find out truly why we practice after we’ve been doing it for a while.

Sure, everybody starts somewhere, we all have a reason that has brought us on the zafu in the first place.

Some want to know what Zen is all about, if it’s about sitting peacefully and comfortably while imagining tropical beaches and singing rainbows but then they discover, quite quickly, that there’s some degree of strain or pain involved and that they’re not even supposed to be imagining things, which is the mother of all bummers.

Others start because they think a spiritual practice is a good thing, simple as that.

Then there are those who feel a pull towards Zen because they feel their life is satisfying but it lacks something and so they search for a real experience to give it substance or meaning.

And there are also those who start out by pure chance, for example, going to a conference about Zen and then signing up for a day of practice, or because their martial arts sensei told them about Zazen, or because, out of the blue, they met a Zen master with a particular talent or interest which they shared. Most long-term Zen disciples begin their practice like that and they uncover the “Why” without even thinking about it, while practicing. Because, in time, through Zazen, their understanding is developed in such way they don’t need to reasonably, intellectually, justify it anymore.

But what has made one to sit in Zazen for the first time is, in most cases, a different matter from why one has and is continuing to sit.

You see, whether you approach it for its calm-enhancing, bliss-inducing, confidence-building benefits or out of sheer curiosity, Zazen has this “ability” of blatantly not giving you what you want.

You want to be calmer? There will be times when, during sitting, you’ll feel so many intense emotions rushing through every single cell of your skin and bones that you’ll actually want to get up and run screaming.

You want a better self-image? You’ll see yourself so clearly and intimately in ways that you, your mother, and the doctor that assisted your birth certainly did not.

You want bliss? You will get intimate with discomfort, boredom, and pain. Sometimes all at once, other times in waves.

If it’s curiosity that made you sit, then consider the cat numb. Not dead, but numb.

So far I’ve given you all the reasons not to practice. So WHY practice Zazen?

We could, therefore, safely say that Zazen is for those wanting to know their self. But couldn’t one achieve that by travelling, going to a therapist, speaking to a best friend or keeping a diary?

It depends of which self we are referring to.

Just as a cell isn’t just its function or its components, but also the “spark” that powers it, the binding life force that enables it to fulfill its role, we, as individuals, are more than the labels we carry around.

If you were to define yourself right now, what would you say? That you are [your name and/or your traits], you like [your preferences], you’ve done [your experience] and you want to [your dreams].

But these are just layers. If you start peeling them off, one by one, is there anything left? And if there is, what is, or who is?

Practice, and maybe, just maybe, if you manage to forget all that you think you are, you’ll find out all that you really are. Zazen may not give you what you want, but it will certainly bring you to all there is. 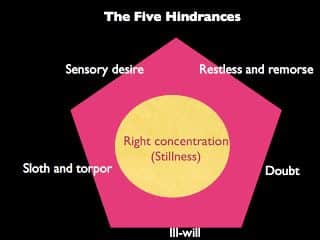