Ananda was the first cousin of the Buddha – he was said to have been born on the same day – and one of the most famous disciples. His father was King Amitodana, the younger brother of King Suddhodana and his mother was Kisa Gotami. Ananda was said to be one of the seven who was born on the same day as the Buddha (Khantaka, the horse; Channa, his charioteer; Yasodhara, his wife; Kaludayi, his minister; Bodhi tree; 4 urns of treasure). As his birth brought happiness to his kinsfolk, he was named Ananda. The word ‘Ānanda’ means ‘bliss’ in Pali, Sanskrit as well as other Indian languages. His birth place is in Kapilavastu, Nepal. Ananda was handsome, pleasing to the eye and very learned. During the 2nd year of the Buddha’s ministry, Ananda with 5 other Sakyan princes ( Devadatta, Bhaddiya, Anuruddha, Bhagu, Kimbila) and the barber, Upali joined the Order at Anupiya Mango Grove in the Malla Country. Soon after, he heard a discourse by Punna Mantaniputta and became a stream winner.

Ananda was handsome, pleasing to the eye and very learned. During the 2nd year of the Buddha’s ministry, Ananda with 5 other Sakyan princes ( Devadatta, Bhaddiya, Anuruddha, Bhagu, Kimbila) and the barber, Upali joined the Order at Anupiya Mango Grove in the Malla Country. Soon after, he heard a discourse by Punna Mantaniputta and became a stream winner.

Ananda is said to have entered the sangha the year after the Buddha attained enlightenment. Initially, the Buddha did not have the same personal attendants at all times, but eventually declared that he was getting old and wanted a monk as his permanent companion, one who would respect his wishes in every way. Ananda agreed to become Buddha’s attendant on the following 8 conditions:

People who wanted to see the Buddha first went to Ananda. Sometimes he arranged for Buddha to preach to laity and even heretics whom he thought needed the Buddha’s advice. Lay devotees often sought out Ananda in arranging a meal for the Buddha.

Ananda was chosen because of his intense loyalty, and he accompanied the Buddha on most his wanderings for over twenty-five years. Ananda is the Buddha’s interlocutor in many canonical dialogues. He is also the key figure in an important episode recorded in Mahaparinibbana Sutta, the Pali text in the Digha Nikaya, which records the Buddha’s final days and his death. Upon learning of the Buddha’s imminent death, Ananda is beside himself with grief, and worries that he will make no further progress on the Path without the Buddha as his teacher. The Buddha tells him that he should not grieve, that he should not be attached to the Buddha’s person. Rather, the Buddha tells him that he has left his disciples the teaching, the dharma, which is all that they need to attain enlightenment.

In the list of the disciples given in Anguttara Niaka, Ananda is mentioned five times, more than any other disciple, and is celebrated for his keen memory – which, according to the tradition, allows him to remember all of the Buddha’s teachings – and his exemplary ethical conduct and service to others.

According to various sources, at the first Buddhist council, held shortly after the Buddha’s death, Ananda had not yet attained enlightenment, and was thus initially excluded from the council. Ananda, however, applied himself with great vigor, and meditated until, much to the astonishment of the other monks, he attained enlightenment just prior to their meeting. At the first council, which was formed in order to record the Buddha’s teaching, Ananda played a key role, chosen to recite large portions of the actual sermons, the Dharma Pitaka portion of the Pali Canon, that the Buddha had delivered during his life. Ananda began each recitation with the phrase ’Thus have I heard’ to indicate that he was merely repeating the Buddha’s teachings, exactly as he had heard them.

Ananda lived to be 120 years old. His last act just before his parinibbana was to convert a seer who came with 500 followers. He was Madhyantika, who later converted Kashmir to Buddhism.

The Pali Canon made no mention of Ananda’s death. According to Fa Hien who recorded an old tradition, that just before his death he floated above the River Rohini. He went into fire meditation and his body was consumed in flames and his remains fell equally on either side for King Ajatasattu and the Licchavis of Vesali. They enshrined the relics in stupas in their respective countries. Hsuan Tsang (a translator of Buddhist scriptures) recorded that he saw both these stupas. 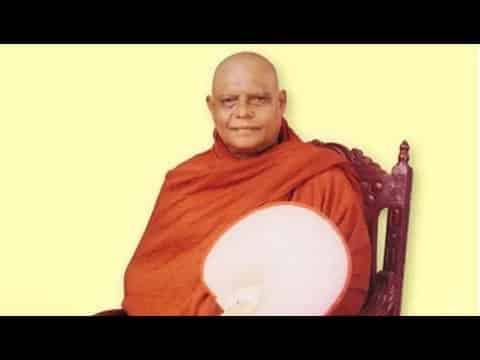