The Heart Sutra – The Zen Universe 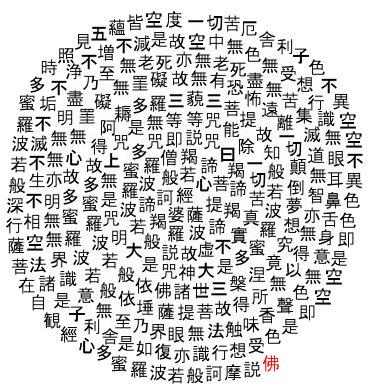 SHA RI SHI SHIKI FU I KU- KU- FU I SHIKI
“Listen, Shariputra, form does not differ from emptiness, nor emptiness from form.

SHA RI SHI ZE SHO HO- KU- SO- FU SHO- FU METSU
“Shariputra, all things are marked with emptiness; they are neither produced nor destroyed;

ZE KO KU- CHU- MU SHIKI MU JU SO- GYO- SHIKI
“Therefore, in emptiness there is neither form, nor feeling, nor perception, nor mental functioning, nor consciousness;

MU SHIKI SHO- KO- MI SOKU HO-
no form, no sound, no smell, no taste, no touchable, no object of mind;

MU GEN KAI NAI SHI MU I SHIKI KAI
no realm of eyes, and so forth until no realm of mind consciousness.

MU CHI YAKU MU TOKU I MU SHO TOK’KO
No wisdom and also no attainment.  With nothing to attain,

ZE MU JO- SHU ZE MU TO- TO- SHU
is the supreme mantra, is the unequaled mantra,

NO- JO IS-SAI KU SHIN JITSU FU KO
that can liberate all suffering truly and indeed.

Sutra on the heart of the perfection of wisdom

The title of this sutra is The Essence of Wisdom, often known as the Heart Sutra. This sutra contains the heart (or essence) of the Prajnaparamita Sutras, the most important teachings of the Buddha. Prajnaparamita means the Perfection of Wisdom, the Wisdom Gone Beyond or the Transcendental Wisdom.

Prajna means wisdom, the great transcendental wisdom, wisdom from understanding the truth, wisdom that can overcome birth-and-death, all suffering, and enlighten all beings.

Paramita means “going beyond,” or perfecting. It is the perfection, the practice that can bring one to liberation. Literally means “to the other shore.” To become a Buddha, the bodhisattva practices the six paramitas: the perfection of charity (dana), moral conduct (sila), tolerance (ksanti), diligence (virya), meditation (dhyana), and, most important of all, wisdom (prajna).

Hrdaya means heart. And the Chinese characters for Heart Sutra can be translated as “mind road.” So this sutra is the “great path for the perfection of wisdom.”

Among the Prajnaparamita Sutras are the extensive, medium and concise Mother Sutras.

The Essence of Wisdom sutra is called like this because it contains the essence of all of the Wisdom Sutras. There is a number of Heart Sutras, both long and short. The long version of the Heart Sutra has been translated and published in many versions. The short one is the most common Buddhist Sutra being used – and highly revered – by all the Buddhist practitioners.

The Heart Sutra is a teaching given by the Bodhisattva Avalokitesvara, the Buddha of Compassion, to the monk Shariputra. It is chanted regularly by followers of Buddhism at meetings and meditation practice. Although The Heart Sutra is very brief, it contains key concepts of Buddhist Philosophy.

These include the skandhas, the four noble truths, the cycle of interdependence and the central concept of Mahayana Buddhism, Emptiness.

Sutra: a Buddhist scripture, spoken by the Buddha or certified (to be true) by the Buddha. A striking feature of this sutra is the fact that its teaching is not actually delivered by the Buddha, which places it in a relatively small class of those ‘’sutras not directly spoken by the Buddha’’. In some Chinese versions of the text, the Buddha confirms and praises the words of Avalokitesvara.

“Well said, well said, that is just how it is my son, just how it is. The profound perfection of wisdom should be practiced exactly as you have explained it, then the Tathagata will be truly delighted.’’

Avalokitesvara is an enlightened being, a Bodhisattva, who has forgone his own entry into Nirvana so that he can help others. In the Heart Sutra, he has realized emptiness through the practice of Prajna-paramita (infinite wisdom) and is preaching to the monk Shariputra.

Sariputra:  A senior disciple of the Buddha, known for his wisdom.

Emptiness is how the Sanskrit noun Sunyata is translated into English. The adjective form is Sunya, Empty. (The Japanese Buddhists use the term ku and the Chinese Buddhists use the term mu). Emptiness is not nothingness. It is the other side of interdependence (pratityasamutpada). All things are inter-related and an object is not independent of the rest. Its existence has no self-being (svabhava).

The form is the solid object, the colour or the sound that is interdependent with the other skandhas. For example a hot stove.

Feeling is the act of the sense organ contacting the object. The skin feels the eye sees, the ears hear. For example, when the skin comes in contact with a hot stove.

Perception is the first sensational awareness of the object. For example, the skin becomes hot when it touches the stove.

In Buddhism, perception is realized by the six senses:

seeing, hearing, smelling, tasting, touching, mind. We usually think of the mind as separate from the other senses, but when we are conscious of an object, or we dream or think of something that is not in front of us, our mind acts as a sense organ. Each sense has three parts, the organ of sense, its object, and its realm of consciousness (datu). For example, the eye sees the colour green, which gives rise to the consciousness of green. Yet, each of these parts is empty, since they are interdependent and cannot be separated. Three parts and six senses give us the eighteen elements of experience.

Impulse is the unconscious reaction to the object. We place our hand on a hot stove and our impulse is to pull it away before we even think. It is the action.

Consciousness is mental awareness of the object. One feels the heat on the hand and thinks, “Ouch!”

Each of the above skandhas is empty since it cannot exist on its own and it is dependent on the four other skandhas. Like a set of blocks forming a house, the entire structure is dependent on its pieces.

The term dharmas is different from the Dharma, the Way or the Teaching. Dharmas are factors of existence. The five skandhas are dharmas. The Hinayana schools consider that the dharmas have qualities, such as arising or disappearing, increasing or decreasing, but the Mahayanists realized that dharmas are empty, without qualities, so the five skandhas are empty (since they are interdependent dharmas, and have no self-qualities).

– The Prajnaparamita Sutra explicitly reveals the stages of profound emptiness. Implicitly, it explains the grounds and paths, the various realisations (produced or arising sequentially) in the mind of the practitioner who is gradually progressing through the path.

– What the Heart Sutra (like all Prajnaparamita Sutras) does, is to cut through, deconstruct, and demolish all our usual conceptual frameworks, all our rigid ideas, all our belief systems, all our reference points, including any with regard to our spiritual path. It does so on a very fundamental level, not just in terms of thinking and concepts, but also in terms of our perception, how we see the world, how we hear, how we smell, taste, touch, how we regard and emotionally react to ourselves and others, and so on.

– Another way to look at the Heart Sutra is that it represents a very condensed contemplation manual. It is not just something to be read or recited, but the intention is to contemplate its meaning in as detailed a way as possible.

– Besides being a meditation manual, we could also say that the Heart Sutra is like a big koan. But it is not just one koan, it is like those Russian dolls: there is one big doll on the outside and then there is a smaller one inside that first one, and there are much smaller ones in each following one. Likewise, all the words “no” in the big koan of the sutra are little koans. Every little phrase with a “no” is a different koan in terms of what the “no” relates to, such as “no eye,” “no ear,” and so on. In other words, all those different “no” phrases give us different angles or facets of the main theme of the sutra, which is emptiness. Emptiness means that things do not exist as they seem, but are like illusions and like dreams. They do not have a nature of their own.

– This scripture has always been held in the greatest veneration in Mahayana countries. The Prajnaparamita-Sutra is regarded as the holy mother that feeds the bodhisattva with the amrita (nectar) of prajna (transcendental wisdom) and guides a bodhisattva to paramita (the other shore). It is the “utmost great perfection” which gives full enlightenment to the bodhisattva after he has successfully completed the other five paramitas: dana (charity), sila (morality), ksanti (patience, forbearance),  virya (energy), and dhyana (concentration).

“There is no attainment and no non-attainment.”

Mindfulness
There are many different ways of understanding mindfulness
13303

Buddhist cosmology – The Zen Universe
The Buddhists, following the traditions of their Indian
0492